Here we get the thoughts of our 2021 Captain Steve Farrar on a challenging year ahead! 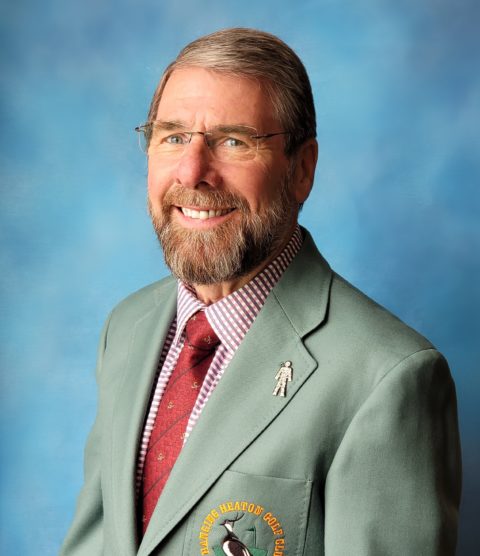 Steve has been an active member of Hanging Heaton Golf Club for many years.  He has interests in helping the club prosper and raising money for local charities and so his choice as 2021 Captain was an obvious one.  Everyone at HHGC wishes him well for the coming year.

His charity for his year in office is Friends In Deed, a local charity founded in 1988.  HHGC members will need no introduction to the charity that Steve and Suzanne have supported for over 30 years and Steve’s year as captain will further highlighted the great work that Friends in Deed do.

Back in 2019 I felt privileged when Brian asked me to be his Vice Captain.

I must say I was a little hesitant at first as my wife Suzanne was still recovering from a serious illness, but after I explained to Suzanne that It would mean me spending more time at the golf club and less with her, she encouraged me to go for it? Lol

First of all, I would like to say what a great Captain Brian has been and I hope I can keep up his good work?

Brian had a good start to his year but, unfortunately, when the Covid-19 hit us and we had to go into lockdown, it certainly turned things upside down. The rest of the year went from one disappointment to another. Unable to complete all the Club competitions, social and fund-raising events, District/league Rabbit, 8-15 & Scratch fixtures and then having his Captain’s trip cancelled at the very last minute was an absolute nightmare for him. However, he managed to get through it all and keep the respect of the members.

I personally have found Brian to be a very generous, fair, considerate and good friend, in other words he’s just one of life’s nice guys.

I know Brian is now taking a well-deserved holiday and I hope he has a great time and would like to wish him all the very best in his coming retirement and the future.

So, I’m hoping that my year as your Club Captain is going to be the reverse of Brian’s. I’m obviously having to start my year the way Brian had to finish, with lots of restrictions and disappointments and without the ability to plan any future events with any certainty.

It should come as no surprise to most of you, that my chosen charity this year is one that quite a few Past Captains have also supported and will be

This is a local charity which is a fund-raising group based in Dewsbury, who raise funds for local needy children. It was formed in March 1988 by founder members: Susan and Michael Benn, David and Liz Tebbs, Edward and Nancy Jennings and Susan and Martin Walker, although there are now only two of the eight founder members left (Susan and Martin Walker) it still has a Committee of 6 people of which I am one.

In past years Captains have nominated certain hazards on the course as a penalty for which players have to pay a fine for landing in: -such as the ditch across 8th that Brian chose last year. Before that it was the ditch across the 5th and I know there has been lots of various bunkers nominated in the past.

I’ve been thinking about this quite a bit just recently, trying to think of ways to make sure I get as many members as possible to contribute to my charity!

Now as I’ve said, these hazards don’t often come into play for a lot of the good golfers, golfers that can hit straight, high and long. I was also considering all the bunkers around the 7th because I know even the good golfers land in these occasionally but because I know that the 7th hole will be out of play this winter for renovation work, I’ve decided against it.

So, I think I’m going to choose the fairway on the first hole, this means any ball that doesn’t land on the fairway up the first will be my penalty hazard. Even the good, long, straight high hitters can’t hit this fairway all the time?

A 50p fine will be payable into the Captain’s Charity every time anyone strays off the first fairway.

Now, if you think you might miss the fairway more than 40 times in a season you can simply donate £20 into my charity from the beginning of my captaincy as this should save a lot of members quite a lot of money?

I know some people may think £20 is asking a lot for my chosen charity? but without having any foreseeable future fundraising events this year due to the Covid-19 situation it might be the only way I can raise any money for my charity “Friends in Deed” so if £20 is too much for you please give as much as you can afford. Thank you!

I think most of you will know by now who my chosen Vice Captain is and will become our Centenary Captain in 2022.

When it came to choosing my VC for the Centenary Year It wasn’t as simple as you may think?

It wasn’t as simple as just asking one of my friends? One that I thought might be up for it? and one that I thought would do a good job at the same time? But having said that, I certainly consider my choice to be a good friend!

So, believe it or not I went through every member in the HHGC EagleApp.

First of all, I made a list of all the people who I thought might consider being the Club Captain.

Then, from there I made a short list of people who I recognised as being a Member for a good number of years!

This did reduce it down to a much smaller number.

I think by this time I had a short list of about 6 people,

I then put them in order 1-6 thinking if my first choice didn’t say yes! then I would progress down the list asking the in next line hoping that I would get a result before I reached number 7, and to be fair being Club Captain is not everyone’s cup of tea?

As it happens, I got a result on number 1.

So, what put my 1st choice at the top of my list you may ask?

Well, this is his background:

First and foremost, he certainly has HHGC to heart, in fact it wouldn’t matter where ever you cut across him, like Blackpool Rock, it would say Hanging Heaton Golf Club!

This a list of things that he’s done and achieved whilst being a member of HHGC, but by no means a list of everything!

He’s been a member for almost half of the club’s 100-year history.

He joined HHGC back in 1973 so he’s been a member for 47 years to date, which means when he becomes our Centenary Captain, he will have been a Member for some 49 yrs. of the clubs 100-year history.

When he first became a Member, he joined the Rabbits Committee until the following year, when his handicap took him out of the Rabbits into the Tiger league.

He was the Scratch Team Captain for 11 yrs.

And was the Huddersfield & Halifax Union rep for 14 yrs.

He also served on the General Committee for over 18 yrs.

Most recently he has run the Lawrence Batley Team for a number of years.

He was the new course layout record holder for 2 yrs. scoring a 68 gross in the President’s Prize 1992.

Whilst serving on the General Committee he was Greens Chairman for 5 years until he finally resigned from the Committee, only to become the Assistant Greenkeeper for 5 years.

He currently, along with his wife, looks after the garden around the putting green and alongside the first tee, plus the new plantation on our newly formed entrance to the golf club.

I sincerely hope you all give him your support and make his year as our Centenary Captain an easy and enjoyable experience as possible!

My Vice-Captain and our Centenary Captain for 2022 is Mr. Stuart Wailes.

I, along with Stuart will be looking for all your support this year as we try to get all the new improvements ready and in place for our Centenary Year in 2022.